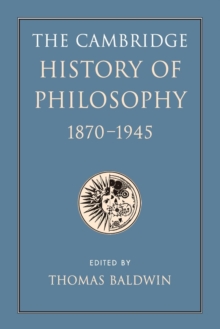 The Cambridge History of Philosophy 1870-1945 comprises over sixty specially commissioned essays by experts on the philosophy of this period and is designed to be accessible to non-specialists who have little previous familiarity with philosophy.

As with the other volumes in the series, much of the emphasis of the essays is thematic, concentrating on developments during the period across a range of philosophical topics, from logic and metaphysics to political philosophy and philosophy of religion.

Several chapters also discuss the changing relationship of philosophy to the natural and social sciences during this period.

The result is an authoritative survey of this rich and varied period of philosophical activity, which will be of critical importance not only to teachers and students of philosophy but also to scholars in neighbouring disciplines such as the history of science, the history of ideas, theology and the social sciences.