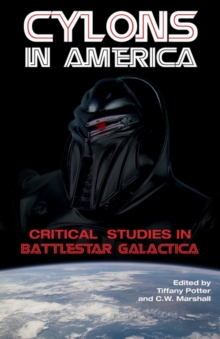 With its fourth season due to air in January 2008, the award-winning Battlestar Galactica continues to be exceptionally popular for non-network television, combining the familiar features of science fiction with direct commentary on life in mainstream America. Cylons in America is the first collection of critical studies of Battlestar Galactica (its 2003 miniseries, and the ongoing 2004 television series), examining its place within popular culture and its engagement with contemporary American society. Battlestar Galactica depicts the remnants of the human race fleeing across space from a robotic enemy called the Cylons.

The fleet is protected by a single warship, the Battlestar, and is searching for a "lost colony" that settled on the legendary planet "Earth." Originally a television series in the 1970s, the current series maintains the mythic sense established with the earlier quest narrative, but adds elements of hard science and aggressive engagement with post-9/11 American politics.

Cylons In America casts a critical eye on the revived series and is sure to appeal to fans of the show, as well as to scholars and researchers of contemporary television.