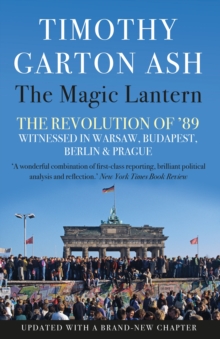 The Magic Lantern : The Revolution of '89 Witnessed in Warsaw, Budapest, Berlin and Prague Paperback / softback

The Magic Lantern is one of those rare books that capture history in the making, written by an author who was witness to some of the most remarkable moments that marked the collapse of Communism in Eastern Europe.

Timothy Garton Ash was there in Warsaw, on 4 June, when the communist government was humiliated by Solidarity in the first semi-free elections since the Second World War.

He was there in Budapest, twelve days later, when Imre Nagy - thirty-one years after his execution - was finally given his proper funeral.

He was there in Berlin, as the Wall opened. And most remarkable of all, he was there in Prague, in the back rooms of the Magic Lantern theatre, with Vaclav Havel and the members of Civic Forum, as they made their 'Velvet Revolution'.