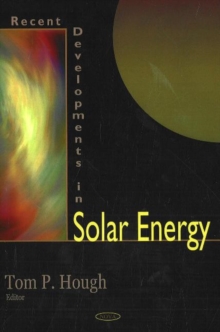 Solar energy is derived ultimately from the sun. It can be divided into direct and indirect categories.

Most energy sources on Earth are forms of indirect solar energy, although we usually don't think of them in that way.

Coal, oil and natural gas derive from ancient biological material which took its energy from the sun (via plant photosynthesis) millions of years ago.

All the energy in wood and foodstuffs also comes from the sun.

Movement of the wind (which causes waves at sea), and the evaporation of water to form rainfall which accumulates in rivers and lakes, are also powered by the sun.

Direct solar energy is what we usually mean when we speak of solar power it is the use of sunlight for heating or generating electricity.

Solar energy research and applications have been receiving increasing attention throughout the world as solar energy must play a much greater role in the energy mix in upcoming years.

This book examines new research in this frontier field.