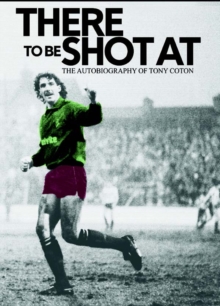 There to be Shot at : The Autobiography of Tony Coton Hardback

Tony Coton is a natural-born fighter - both on and off the pitch.

Rejected by Wolverhampton Wanderers and Aston Villa as a teenager, Coton became a professional footballer the hard way, grafting as an amateur footballer before getting his big break with Birmingham City, the club he supported as a boy.

A reputation as a fine young goalkeeper followed. Coton was to become widely regarded as the best goalkeeper to never play for England.

At Watford, the late Graham Taylor saved Coton from jail.

He then made a surprise move from Manchester City to Manchester United and finally to Sunderland before retiring a er a series of horrific injuries.

Coton spent nine years working under the most successful and enigmatic managers football has seen and eventually also assumed the role of identifying potential new keepers following the great Peter Schmeichel's departure from the club.

Coton has since had spells working at the coalface of football.He has scouted for Bolton, Wigan and Queens Park Rangers and was temporarily Mick Harford's assistant manager at QPR. There was also a lucrative spell in Abu Dhabi, working as a goalkeeping coach at Al Ahli.

At the age of 54 and after surviving a heart condition, Tony is now back where it all started: Aston Villa.

He has since been promoted to head of recruitment by Steve Bruce.

From non-league to the top of the Premier League; from the Birmingham Six to a model professional, Coton has done it all.

There to be Shot At chronicles the rise and fall of a goalkeeping legend.

There to be Shot At