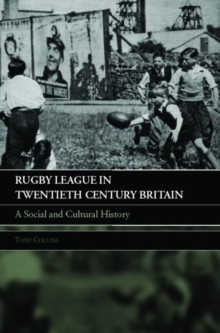 Called `the greatest game of all' by its supporters but often overlooked by the cultural mainstream, no sport is more identified with England's northern working class than rugby league.

This book traces the story of the sport from the Northern Union of the 1900s to the formation of the Super League in the 1990s, through war, depression, boom and deindustrialisation, into a new economic and social age.

Using a range of previously unexplored archival sources, this extremely readable and deeply researched book considers the impact of two world wars, the significance of the game's expansion to Australasia and the momentous decision to take rugby league to Wembley.

It investigates the history of rugby union's long-running war against league, and the sport's troubled relationship with the national media.

Most importantly, this book sheds new light on issues of social class and working-class masculinity, regional identity and the profound impact of the decline of Britain's traditional industries.

For all those interested in the history of sport and working-class culture, this is essential reading.