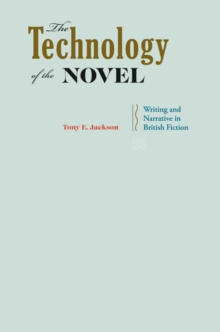 The Technology of the Novel : Writing and Narrative in British Fiction Hardback

The connection between speech and writing in human language has been a matter of philosophical debate since antiquity.

By plumbing the depths of this complex relationship, Tony E.

Jackson explains how the technology of alphabetic writing has determined the nature of the modern novel. Jackson's analysis begins with the universal human act of oral storytelling.

While telling stories is fundamental to human experience, writing is not.

Yet the novel, perhaps more than any other literary form, depends on writing.

In fact, as Jackson shows quite clearly, it is writing rather than print that most shapes the forms and contents of the genre. Through striking new readings of works by Austen, Mary Shelley, Dickens, Forster, Woolf, Lessing, and McEwan, Jackson reveals how the phenomena of speech and storytelling interact with the technological characteristics of writing.

He also explains how those interactions induced the generic changes in the novel from its eighteenth-century beginnings to postmodernism and beyond.

His claims, grounded in a contemporary understanding of human cognitive capacities and constraints, offer a fresh interpretive approach to all written literature. An essential text in the study of the written word, The Technology of the Novel provides new insights into the evolving nature of one of the modern world's most popular narrative forms.