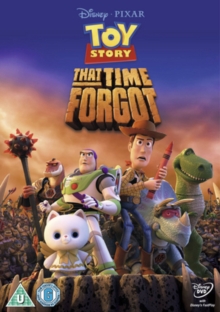 When Bonnie sets them aside and goes off to play Mason's new game console the toys discover the boy's dinosaur action figures called The Battlesaurs.

However, it becomes clear that The Battlesaurs aren't aware they are toys when Woody and Buzz are forced to do battle against their leader Reptilius Maximus (Kevin McKidd).

With her friends in danger it is left to Trixie to save the day...