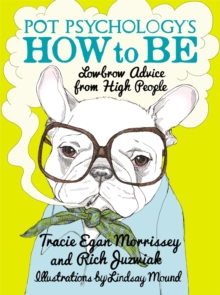 Pot Psychology's How To Be : Lowbrow Advice From High People Hardback

It's in our blood...because we're stoned. That's the point. And what better way to legitimize two stoned people's need to babble advice than with a book?Allow us to introduce ourselves: We're Tracie and Rich.

We go way back. We met as teenagers in 1998, during our freshman year at NYU.

We were at a dorm party, where lesbians and gay men were making out.

Tracie had short hair and glasses; Rich approached and asked, "Do you like Ani DiFranco?" That was not a come-on.

We didn't kiss (and Tracie is not a lesbian, anyway), but we did shotgun a joint.

From there, a friendship was born. Flash forward 12 years. We host an Internet video series in which we answer viewer-submitted questions, solving their problems with the help of an herbal remedy.

Basically we get stoned and tell people how to live their lives.

We give our two cents (or is that 420 sense?) on all of life's non-problems from party etiquette, problems in the workplace, what religion to be, to whether or not your boyfriend/girlfriend/parent/friend/teacher/pet is gay. At this point, we want to get higher, and take things to the next level.

We've already gotten inside people's heads-now we want to get in their pants.

With a pocket guide, pervert. It is intended to be a reference guide for people to carry through life. Because you never know when life will present a non-problem outside of a wifi hot zone. (And that's a non-problem solved right there.)