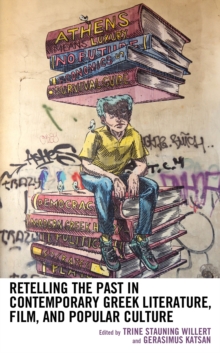 Retelling the Past in Contemporary Greek Literature, Film, and Popular Culture Hardback

This book deals with historical consciousness and its artistic expressions in contemporary Greece since 1989 from the point of view that contemporary Greeks have been faced with the contradictions between on the one hand a glorious, world-famous yet distant past and, on the other, a traumatic contemporary history of wars, expulsions, civil strife and political and economic crises.

Such clashes of imaginary identifications and collective traumas call for interpretations not only from historians but also from artists and storytellers.

Therefore, the chapters in this volume explore the ways in which sensitive and creative perspectives of art approach and appropriate history in Greece.

Through a rich collection of analytical case studies and creative reflections on Greece's past, present, and future this volume presents the reader with the ways a set of contemporary Greek storytellers in different genres have incorporated previously under-explored or little-known themes, events, and epochs in modern Greek history showing how the past, by being interpreted and represented in the present, can teach us a lot about contemporary Greek society.

The themes that form the point of departure for the stories told or retold cover various significant components of Greek history and culture such as ancient myths, the Ottoman period, the Greek War of Independence and the Greek Civil War, but also less prominent or known aspects of Greek history such as the Greek Enlightenment, the long and tragic history of Greek Jewry, and migration to and from Greece.