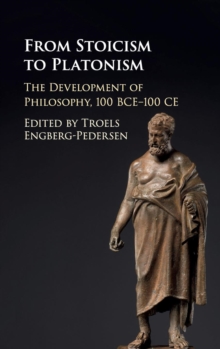 From Stoicism to Platonism : The Development of Philosophy, 100 BCE-100 CE Hardback

From Stoicism to Platonism describes the change in philosophy from around 100 BCE, when monistic Stoicism was the strongest dogmatic school in philosophy, to around 100 CE, when dualistic Platonism began to gain the upper hand - with huge consequences for all later Western philosophy and for Christianity.

It is distinguished by querying traditional categories like 'eclecticism' and 'harmonization' as means of describing the period.

Instead, it highlights different strategies of 'appropriation' of one school's doctrines by philosophers from the other school, with all philosophers being highly conscious of their own identity.

The book also sets out to break down the traditional boundaries between, on the one hand, the study of Greco-Roman philosophy in the period and, on the other hand, that of contemporary Hellenistic Jewish and early Christian writings with a philosophical profile.

In these ways, the book opens up an immensely fruitful period in the history of philosophy.