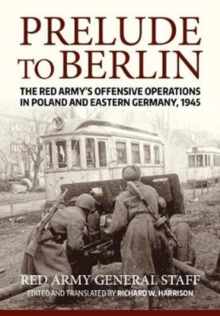 Prelude to Berlin: The Red Army's Offensive Operations in Poland and Eastern Germany 1945 offers a panoramic view of the Soviet strategic offensives north of the Carpathians in the winter of 1945.

During the course of this offensive the Red Army broke through the German defences in Poland and East Prussia and eventually occupied all of Germany east of the Oder River.

The book consists primarily of articles that appeared in various military journals during the first decade after the war.

The General Staff's directorate charged with studying the war experience published these studies, although there are other sources as well.

A particular highlight of these is a personal memoir that offers a rare insight into Soviet strategic planning for the winter-spring 1945 campaign.

These include the Vistula-Oder operation by the First Belorussian and First Ukrainian Fronts out of their respective Vistula bridgeheads.

This gigantic operation, involving over a million men and several thousand tanks, artillery and other weapons sliced through the German defences and, in a single leap, advanced the front to the Oder River, less than 100 kilometres from Berlin, from which they launched their final assault on the Reich in April.

This operation helped to clear the flank further to the south and exacted a long-awaited revenge for the Russian Army's defeat here in 1914.

This effort cut off the German forces in East Prussia and concluded with an effort to clear the flanks in Pomerania and the storming of the East Prussian capital of Konigsberg in April.

These operations cleared the army's flanks in the south and deprived Germany of one of its last major industrial and agricultural areas.