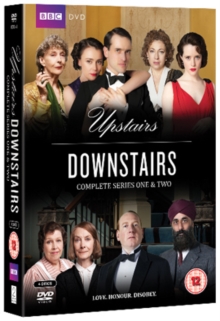 The first and second series of the BBC remake of the 1970s period drama charting the exploits of one middle-class family and their working-class servants.

Former parlour maid Rose (Jean Marsh) is put in charge of recruiting the new household staff and soon both the residents from upstairs and downstairs are embroiled in more than just domestic drama, with romance and clandestine plots taking hold.

The episodes comprise: 'The Fledgling', 'The Ladybird' and 'The Cuckoo'.

The second series is set during the year before the outbreak of World War II.

While the threat of war makes Hallam's work at the Foreign Office all the more stressful, his relationship with Agnes suffers.

When she gets acquainted with American businessman Casper Landry (Michael Landes), Hallam becomes jealous and is tempted by Persie who has just returned from Germany where anti-Semitic violence has become rampant.

Meanwhile, new nursery maid Beryl (Laura Haddock) is hired and immediately attracts chauffeur Spargo (Neil Jackson); butler Pritchard (Adrian Scarborough)'s past comes back to haunt him; and the servants all learn to cope with the absence of Rose who is suffering from tuberculosis.

The episodes comprise: 'A Faraway Country About Which We Know Nothing', 'The Love That Pays the Price', 'A Perfect Specimen of Womanhood', 'All the Things You Are', 'The Last Waltz' and 'Somewhere Over the Rainbow'.