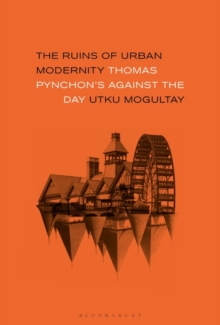 The Ruins of Urban Modernity : Thomas Pynchon's Against the Day Paperback / softback

The Ruins of Urban Modernity examines Thomas Pynchon's 2006 novel Against the Day through the critical lens of urban spatiality.

Navigating the textual landscapes of New York, Venice, London, Los Angeles and the 1893 Chicago World's Fair, Against the Day reimagines urban modernity at the turn of the 20th century.

As the complex novel collapses and rebuilds anew the spatial imaginaries underlying the popular fictions of urban modernity, Utku Mogultay explores how such creative disfiguration throws light on the contemporary urban world.

Through critical spatial readings, he considers how Pynchon historicizes issues ranging from the commodification of the urban landscape to the politics of place-making.

In Mogultay's reading, Against the Day is shown to offer an oblique negotiation of postmodern urban spaces, thus directing our attention to the ongoing erosion of sociospatial diversity in North American cities and elsewhere.