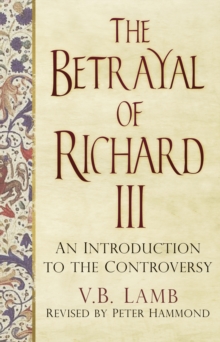 The Betrayal of Richard III : An Introduction to the Controversy Paperback / softback

by V. B. Lamb, Peter Hammond

In this classic work, Peter Hammond and the late V.B.

Lamb survey the life and times of Richard III and examine the contemporary evidence for the events of his reign, tracing the origins of the traditional version of his career as a murderous tyrant and its development since his death.

The evident grief of the citizens of York on hearing of the death of Richard III - recording in the Council Minutes that he had been 'piteously slane and murdered to the Grete hevynesse of this citie' - is hardly consistent with the view of the archetypal wicked uncle who murdered his nephews, the Princes in the Tower, and there is an extraordinary discrepancy between this monster and the man as he is revealed by contemporary records. An ideal introduction to one of the greatest mysteries of English history, this new edition is revised by Peter Hammond and includes an introduction and notes.