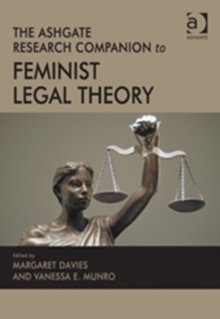 Those three decades have seen consolidation and renewal of its central concerns as well as remarkable growth, dynamism and change.

This Companion celebrates the strength of feminist legal thought, which is manifested in this dynamic combination of stability and change, as well as in the diversity of perspectives and methodologies, and the extensive range of subject-matters, which are now included within its ambit.

Bringing together contributors from across a range of jurisdictions and legal traditions, the book provides a concise but critical review of existing theory in relation to the core issues or concepts that have animated, and continue to animate, feminism.

It provides an authoritative and scholarly review of contemporary feminist legal thought, and seeks to contribute to the ongoing development of some of its new approaches, perspectives, and subject-matters. The Companion is divided into three parts, dealing with 'Theory', 'Concepts' and 'Issues'.

The first part addresses theoretical questions which are of significance to law, but which also connect to feminist theory at the broadest and most interdisciplinary level.

The second part also draws on general feminist theory, but with a more specific focus on debates about equality and difference, race, culture, religion, and sexuality.