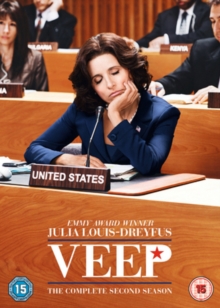 All ten episodes from the second season of the US political comedy spin-off of British show 'The Thick of It', created by Armando Iannucci and starring Julia Louis-Dreyfus.

The series follows Vice President Selina Meyer (Louis-Dreyfus), assisted by her personnel, which include Chief of Staff Amy Brookheimer (Anna Chlumsky) and personal assistant Gary Walsh (Tony Hale), as she goes about her daily business in Office.