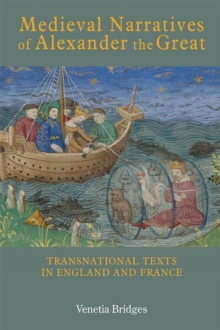 How was Alexander the Great - controversial king, conqueror, explorer, and pupil of Aristotle, the subject of histories, romances, epic poetry, satires, and sermons in most of the languages of Europe and the Middle East - read, written and rewritten during the High Middle Ages?

Aiming to illuminate not only the conqueror's history but also the fast-changing and complex literary landscape that existed between 1150 and 1350, this study considers Alexander narratives in Latin, varieties of French and English - the Alexandreis, the Roman d'Alexandre, the Roman de toute chevalerie, and Kyng Alisaunder - to address this vast and wide-ranging question.

These important Alexander works are compared with the fortunes of other prestigious inherited tales, such as stories of Arthur and Troy, highlighting the various forms of translatio studii then prevalent across northern France and Britain.

The book's historically appropriate focus on Latin, French and English allows it to take a multilingual and comparative approach to linguistic, literary and political cultures, moving away from interpretations driven by post-medieval nationalism to set the expansive phenomenon that is Alexander in its historical and transnational context. Venetia Bridges is Assistant Professor in the Department of English Studies at Durham University.