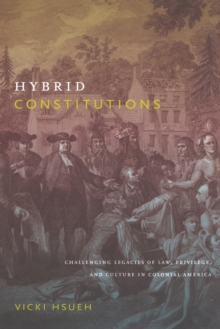 In Hybrid Constitutions, Vicki Hsueh contests the idea that early-modern colonial constitutions were part of a uniform process of modernization, conquest, and assimilation.

Through detailed analyses of the founding of several seventeenth-century English proprietary colonies in North America, she reveals how diverse constitutional thought and practice were at the time, and how colonial ambitions were advanced through cruelty toward indigenous peoples as well as accommodation of them.

Proprietary colonies were governed by individuals (or small groups of individuals) granted colonial charters by the Crown.

These proprietors had quasi-sovereign status over their colonies; they were able to draw on and transform English legal and political instruments as they developed constitutions.

Hsueh demonstrates that the proprietors cobbled together constitutions based on the terms of their charters and the needs of their settlements.

The "hybrid constitutions" they created were often altered based on interactions among the English settlers, other European settlers, and indigenous peoples.Hsueh traces the historical development and theoretical implications of proprietary constitutionalism by examining the founding of the colonies of Maryland, Carolina, and Pennsylvania.

She provides close readings of colonial proclamations, executive orders, and assembly statutes, as well as the charter granting Cecilius Calvert the colony of Maryland in 1632; the Fundamental Constitutions of Carolina, adopted in 1669; and the treaties brokered by William Penn and various Lenni Lenape and Susquehannock tribes during the 1680s and 1690s.

These founding documents were shaped by ambition, contingency, and limited resources; they reflected an ambiguous and unwieldy colonialism rather than a purposeful, uniform march to modernity.

Hsueh concludes by reflecting on hybridity as a rubric for analyzing the historical origins of colonialism and reconsidering contemporary indigenous claims in former settler colonies such as Australia, New Zealand, and the United States. 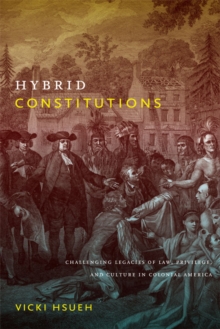