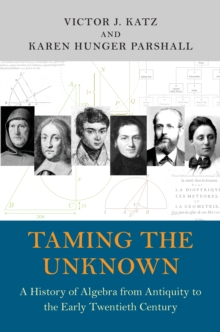 Taming the Unknown : A History of Algebra from Antiquity to the Early Twentieth Century Hardback

What is algebra? For some, it is an abstract language of x's and y's.

For mathematics majors and professional mathematicians, it is a world of axiomatically defined constructs like groups, rings, and fields.

Taming the Unknown considers how these two seemingly different types of algebra evolved and how they relate.

Victor Katz and Karen Parshall explore the history of algebra, from its roots in the ancient civilizations of Egypt, Mesopotamia, Greece, China, and India, through its development in the medieval Islamic world and medieval and early modern Europe, to its modern form in the early twentieth century. Defining algebra originally as a collection of techniques for determining unknowns, the authors trace the development of these techniques from geometric beginnings in ancient Egypt and Mesopotamia and classical Greece.

They show how similar problems were tackled in Alexandrian Greece, in China, and in India, then look at how medieval Islamic scholars shifted to an algorithmic stage, which was further developed by medieval and early modern European mathematicians. With the introduction of a flexible and operative symbolism in the sixteenth and seventeenth centuries, algebra entered into a dynamic period characterized by the analytic geometry that could evaluate curves represented by equations in two variables, thereby solving problems in the physics of motion.

This new symbolism freed mathematicians to study equations of degrees higher than two and three, ultimately leading to the present abstract era. Taming the Unknown follows algebra's remarkable growth through different epochs around the globe. 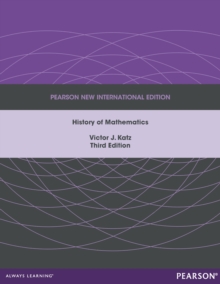 A History of Mathematics: Pearson New... 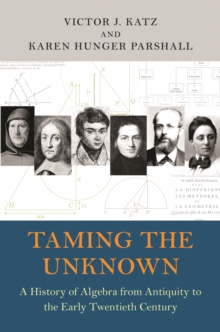