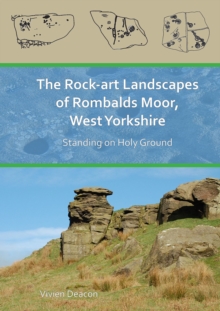 This landscape study of the rock-art of Rombalds Moor, West Yorkshire, considers views of and from the sites.

In an attempt to understand the rock-art landscapes of prehistory the study considered the environment of the moor and its archaeology along with the ethnography from the whole circumpolar region. All the rock-art sites were visited, and the sites, motifs and views recorded.

The data was analysed at four spatial scales, from the whole moor down to the individual rock.

Several large prominent and impressive carved rocks, interpreted as natural monuments, were found to feature in the views from many much smaller rock-art sites.

Several clusters of rock-art sites were identified. An alignment was also identified, composed of carved stones perhaps moved into position.

The possibility that far-distant views might be significant was also indicated by some of the findings. The physicality of carving arose as a major theme.

The natural monuments are all difficult or dangerous to carve; conversely, the more common, simple sites mostly required the carver to kneel or crouch down.

This, unexpectedly for British rock-art, raises comparisons with some North American rock-art, where some highly visible sites were carved by religious specialists, and others, inconspicuous and much smaller, were carved by ordinary people.