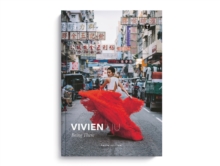 Vivien Liu : Being There Paperback / softback

"Architects are trained to see a space before it's realised, so I think photography helps me with that.

But I'd also say it's the other way around. My training helps me with the way I photograph. I look at space with a more symmetrical eye, and you see a lot of symmetry in my photos." ~ Vivien LiuVivien Liu studied architecture at the University of Waterloo and then attended Harvard University's Graduate School of Design, where she was awarded the prestigious Clifford Wong Prize in Housing Design.

As an architect, she has worked for nearly a decade in the United States, Canada, the United Kingdom, China and Hong Kong, where she now resides and first took up photography.

As a photographer, she quickly developed a strong sensibility portraying space as seen through the first person, which now defines her style.

What began as a weekend pastime has transformed Vivien into one of the most prolific urban photographers in Hong Kong, attracting over 240,000 followers on Instagram. Her first book, Being There explores the dialogue and tension between people and spaces through portraiture, landscapes, and street photography, from the urban density of Hong Kong and Tokyo to epic natural landscapes like Zhangjajie, China.

With an architect's artful eye, Ms. Liu captures this juxtaposition in the most beautiful way, sharply highlighting her eye for patterns and symmetry across settings.