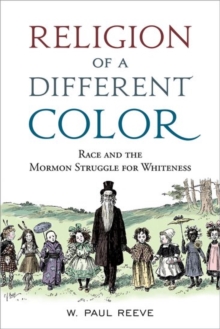 Religion of a Different Color : Race and the Mormon Struggle for Whiteness Paperback / softback

Mormonism is one of the few homegrown religions in the United States, one that emerged out of the religious fervor of the early nineteenth century. Yet, members of the Church of Jesus Christ of Latter-day Saints have struggled for status and recognition. In this book, W. Paul Reeve explores the ways in which nineteenth century Protestant white America made outsiders out of an inside religious group. Much of what has been written on Mormon otherness centers uponeconomic, cultural, doctrinal, marital, and political differences that set Mormons apart from mainstream America. Reeve instead looks at how Protestants racialized Mormons, using physical differences in order to define Mormons as non-White to help justify their expulsion from Ohio, Missouri, andIllinois. He analyzes and contextualizes the rhetoric on Mormons as a race with period discussions of the Native American, African American, Oriental, Turk/Islam, and European immigrant races. He also examines how Mormon male, female, and child bodies were characterized in these racialized debates.

For instance, while Mormons argued that polygamy was ordained by God, and so created angelic, celestial, and elevated offspring, their opponents suggested that the children were degenerate anddeformed. The Protestant white majority was convinced that Mormonism represented a racial-not merely religious-departure from the mainstream and spent considerable effort attempting to deny Mormon whiteness. Being white brought access to political, social, and economic power, all aspects of citizenship in which outsiders sought to limit or prevent Mormon participation. At least a part of those efforts came through persistent attacks on the collective Mormon body, ways in which outsiders suggested thatMormons were physically different, racially more similar to marginalized groups than they were white. Medical doctors went so far as to suggest that Mormon polygamy was spawning a new race. Mormons responded with aspirations toward whiteness. It was a back and forth struggle between what outsidersimagined and what Mormons believed. Mormons ultimately emerged triumphant, but not unscathed. Mormon leaders moved away from universalistic ideals toward segregated priesthood and temples, policies firmly in place by the early twentieth century. So successful were Mormons at claiming whiteness for themselves that by the time Mormon Mitt Romney sought the White House in 2012, he was labeled "the whitest white man to run for office in recent memory." Ending with reflections on ongoing viewsof the Mormon body, this groundbreaking book brings together literatures on religion, whiteness studies, and nineteenth century racial history with the history of politics and migration.