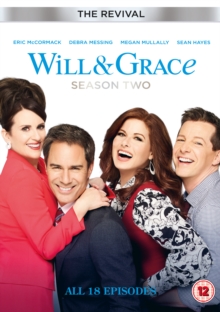 Will and Grace - The Revival: Season Two DVD

All 18 episodes from the second season of the revival of the popular American television sitcom about gay lawyer Will Truman (Eric McCormack) and his best friend Grace Adler (Debra Messing).

In this season, Grace campaigns to become president of the New York Society of Interior Designers, Will gets a date with new anchor McCoy Whitman (Matt Bomer), and Jack (Sean Hayes) makes preparations for his upcoming wedding.