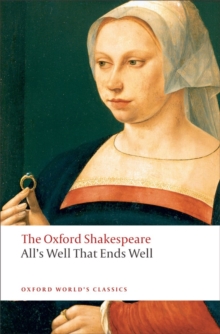 Usually classifed as a 'problem comedy', All's Well that Ends Well invites a fresh assessment. Its psychologically disturbing presentation of an agressive, designing woman and a reluctant husband wooed by trickery won it little favour in earlier centuries, and both directors and critics have frequently tried to avoid or simplify its uncomfortable elements. More recently, several distinguished productions have revealed it as an exceptionally penetratingstudy of both personal and social issues. In her introduction Susan Snyder makes the play's clashing ideologies of class and gender newly accessible. She explains how the very discords of style can be seen as a source of theatrical power and complexity, and offers a fully reconsidered, helpfully annotated text for both readers and actors.