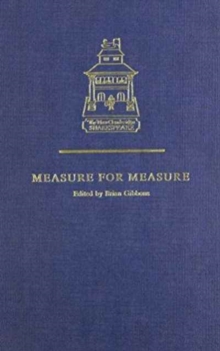 Since the rediscovery of Elizabethan stage conditions early this century, admiration for Measure for Measure has steadily risen.

It is now a favourite with the critics and has attracted widely different styles of performance.

At one extreme the play is seen as a religious allegory, at the other it has been interpreted as a comedy protesting against power and privilege.

Brian Gibbons focuses on the unique tragi-comic experience of watching the play, the intensity and excitement offered by its dramatic rhythm, the reversals and surprises which shock the audience even to the end.

The introduction describes the play's critical reception and stage history and how these have varied according to prevailing social, moral, and religious issues, which were highly sensitive when Measure for Measure was written, and have remained so to the present day.