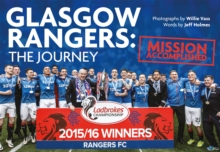 From Brechin to Barton, Joey, Glasgow Rangers: The Journey (Mission Accomplished) tells the incredible story - in words and stunning colour pictures - of a record-breaking club's demise and rise.

Financial woes, serious mismanagement and a string of embarrassing on-field displays had supporters wondering just how their club had ended up in such a mess.

Demoted to the bottom tier of Scottish football by a seemingly uncaring legislative body and blood-seeking rival clubs, Rangers had to clamber up from the depths of the game, but far from being left to do it alone, they were backed by the most incredible supporters Scottish football has ever witnessed.

While those clubs who voted to demote the Gers could only dream of 'sell-out Saturdays' Rangers regularly posted the highest attendances in the country - and beyond.

The indomitable spirit of a club under siege eventually won the day, and thanks to the sterling efforts of many groups and individuals, ensuring Rangers will be here for future generations to support and cherish.From that first Ramsdens Cup match against Brechin City, to the signing of talented midfielder Joey Barton, this book captures perfectly 'the journey' to hell and back. Many slogans, both positive and negative, emerged during Rangers' four-year hiatus, but only one really matters, and stood the test of time.