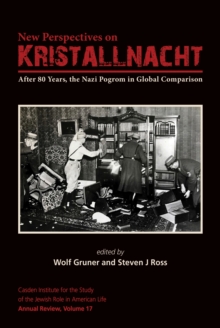 Part of the Jewish Role in American Life series

On November 9 and 10, 1938, Nazi leadership unleashed an unprecedented orchestrated wave of violence against Jews in Germany, Austria, and the Sudetenland, supposedly in response to the assassination of a Nazi diplomat by a young Polish Jew, but in reality to force the remaining Jews out ofthe country.

During the pogrom, Stormtroopers, Hitler Youth, and ordinary Germans murdered more than a hundred Jews (many more committed suicide) and ransacked and destroyed thousands of Jewish institutions, synagogues, shops, and homes.

Thirty thousand Jews were arrested and sent to Nazi concentration camps. Volume 17 of the Casden Annual Review includes a series of articles presented at an international conference titled "New Perspectives on Kristallnacht: After 80 Years, the Nazi Pogromin Global Comparison." Assessing events 80 years after the violent anti-Jewish pogrom of 1938, contributors to this volume offer new cutting-edge scholarship on the event and its repercussions.

Contributors include scholars from the United States, Germany, Israel, and the United Kingdom who represent a wide variety of disciplines, including history, political science, and Jewish and media studies.

Their essays discuss reactions to the pogrom by victims and witnesses inside Nazi Germany as well as by foreign journalists, diplomats, Jewish organizations, and Jewish print media.

Several contributors to the volume analyze postwar narratives of and global comparisons to Kristallnacht, with the aim of situating this anti-Jewish pogrom in its historical context, as well as its place in world history.

Also in the Jewish Role in American Life series 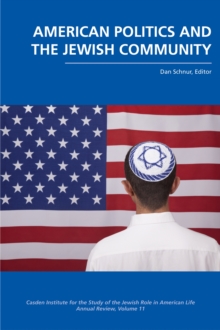 American Politics and the Jewish...