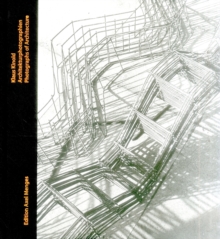 Text in English & German. The work of Klaus Kinold, born 1939 in Essen, is part of a tradition of photography, and particularly of architectural photography.

Architecture was one of the most important themes even of early photography -- not least because it stood still.

Initially this was an important characteristic, since exposure times were long.

Thus began the affinity of photography with the documentary.

Reality and representation were supposed to correspond.

Quoting a statement by Roland Barthes, Kinold has referred to the still "mysterious bonus of confidence given to the documentary".

At a time when digital photographic and processing techniques make all sorts of manipulation possible, the now rare quality of reliability is assigned to this attitude. It was self-evident for Kinold to explore the period whose very name included the term objectivity -- the New Objectivity (in German: Neue Sachlichkeit).

The work of colleagues such as Werner Mantz, Hugo Schmolz, Arthur Koster and above all Albert Renger-Patzsch combined useful information and contemporary artistic expression.

Walter Peterhans, photographer at the Bauhaus, called it the "magic of precision". At the same time, Kinold did not let himself be confused by the special effects indulged in by some modernist artists.

His photographs indicate the structure of the surfaces of a building, the spatial depth and the details concealed in its shadowed sections, the proportions in which they present themselves to the user.

The accuracy of observation, the precision in detail, the translation of three-dimensional objects into a convincingly construed image are among the virtues of the architectural photographer Klaus Kinold.

What takes precedence in his work is not the moment at which a thing suddenly reveals its essence, a lucky coincidence, but rather the condition that is considered to be essential, set also by the right photographic standpoint.

For Kinold, who owed a great deal to his teacher Egon Eiermann at the Technische Hochschule in Karlsruhe, including in his capacity as a photographer, logic, purity and clarity went without saying. Accordingly, predominant in his work, we find photographs of buildings by architects whom he could expect to have such qualities: classic Modernists like Walter Gropius, Ludwig Mies van der Rohe, Le Corbusier and contemporaries like Alvar Aalto, Hans Dollgast, Herman Hertzberger, Louis Kahn, Karljosef Schattner, Rudolf Schwarz, Alvaro Siza. Architectural historian Wolfgang Pehnt, born 1931, has often reaped the benefits of insights gained from Kinolds photographic art.

Pehnt has published monographs about German architecture since 1900 and about Expressionist architecture, but he has also written about numerous individual uvres.

He formerly taught at the Ruhruniversitat Bochum.