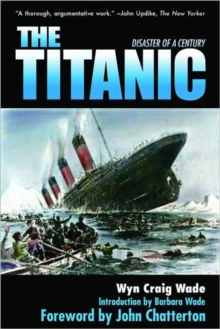 The Titanic : Disaster of a Century Paperback / softback

In this centennial edition of the definitive book on the Titanic, new findings, photos, and interviews shed light on the world's most famous marine disaster for the 100th anniversary of the Titanic's sinking. On that fatal night in 1912 the world's largest moving object disappeared beneath the waters of the North Atlantic in less than three hours.

Why was the ship sailing through waters well known to be a "mass of floating ice"?

Why were there too few lifeboats? Why were a third of the survivors crew members? Based on the sensational evidence of the U.S. Senate hearings, eyewitness accounts, and the results of the 1985 Woods Hole expedition that photographed the ship, this electrifying account vividly recreates the vessel's last desperate hours afloat and fully addresses the questions that have continued to haunt the tragedy of the Titanic.