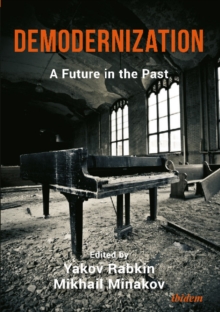 Demodernization : A Future in the Past Paperback / softback

Medical doctors driving taxis, architects selling beer on street corners, scientific institutes closed down amid rusting carcasses of industrial plantsthese images became common at the turn of the 21st century in many once modern civilized countries.

In quite a few of them, long-time neighbours came to kill each other, apparently motivated by the newly discovered differences of religion, language, or origin.

Rational arguments of geopolitical nature have been replaced by claims of self-righteousness and moral superiority.

These snapshots are not random. They are manifestations of a phenomenon called demodernization that can be observed from the banks of the Neva to the banks of the Euphrates, from the deserts of Central Asia to the English countryside and all the way to the city of Detroit.

Demodernization is a growing trend today, but it also has a history.

The book is divided into three parts dedicated to conceptual debates as well as historical and contemporary cases.

It book provides a wealth of empirical materials and conceptual insights that provide a multi-faceted approach to demodernization.