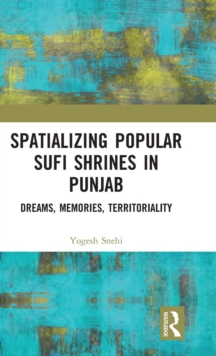 It traverses the worldview of shrine spaces, rituals and their complex narratives, and provides an insight into their urban and rural landscapes in the post-Partition (Indian) Punjab.

What happened to these shrines when attempts were made to dissuade Sikhs, Muslims and Hindus from their veneration of popular saints in the early twentieth century?

What was the fate of popular shrines that persisted even when the Muslim population was virtually wiped off as a result of migration during Partition?

How did these shrines manifest in the context of the threat posed by militants in the 1980s?

How did such popular practices reconfigure themselves when some important centres of Sufism were left behind in the West Punjab (now Pakistan)?

This book examines several of these questions and utilizes a combination of analytical tools, new theoretical tropes and an ethnographic approach to understand and situate popular Sufi shrines so that they are both historicized and spatialized.

As such, it lays out some crucial contours of the method and practice of understanding popular sacred spaces (within India and elsewhere), bridging the everyday and the metanarratives of power structures and state formation.

This book will be useful to scholars, researchers and those engaged in interdisciplinary work in history, social anthropology, historical sociology, cultural studies, historical geography, religion and art history, as well as those interested in Sufism and its shrines in South Asia.