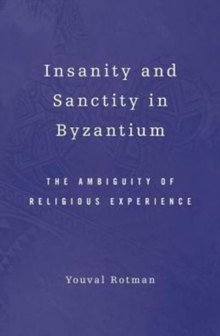 Insanity and Sanctity in Byzantium : The Ambiguity of Religious Experience Hardback

In the Roman and Byzantine Near East, the holy fool emerged in Christianity as a way of describing individuals whose apparent madness allowed them to achieve a higher level of spirituality.

Insanity and Sanctity in Byzantium examines how the figure of the mad saint or mystic was used as a means of individual and collective transformation in the period between the birth of Christianity and the rise of Islam.

It presents a novel interpretation in revealing the central role that psychology plays in social and historical development. Early Christians looked to figures who embodied extremes of behavior--like the holy fool, the ascetic, the martyr--to redefine their social, cultural, and mental settings by reading new values in abnormal behavior.

Comparing such forms of extreme behavior in early Christian, pagan, and Jewish societies, and drawing on theories of relational psychoanalysis, anthropology, and sociology of religion, Youval Rotman explains how the sanctification of figures of extreme behavior makes their abnormality socially and psychologically functional.

The sanctification of abnormal mad behavior created a sphere of ambiguity in the ambit of religious experience for early Christians, which brought about a deep psychological shift, necessary for the transition from paganism to Christianity. A developing society leaves porous the border between what is normal and abnormal, between sanity and insanity, in order to use this ambiguity as a means of change.

Rotman emphasizes the role of religion in maintaining this ambiguity to effect a social and psychological transformation.