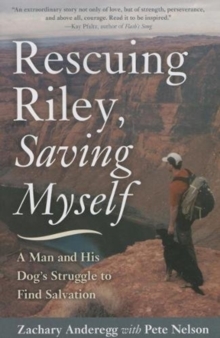 Rescuing Riley, Saving Myself : A Man and His Dog's Struggle to Find Salvation Paperback / softback

"This heartwarming book is for those who appreciate tales of adventure, overcoming adversity, and the strong relationships formed between dogs and their people." Library Journal, starred reviewWhile hiking on a solo vacation in a remote, uninhabitable region of Arizona, Zachary Anderegg happened upon Riley, an emaciated puppy clinging to life at the bottom of a 350-foot canyon.

In a daring act of humanity that trumped the deliberate savagery behind Riley's presence in such a place, Zak single-handedly orchestrated a delicate rescue. Zak and Riley's destinies were intertwined long before they improbably found each other.

For much of Zak's childhood, he was at the bottom of a veritable canyon himself a canyon in which imprisoning depth and darkness were created by bullies who just wouldn't quit and parents who weren't capable of love. When Zak found Riley, the puppy's condition bespoke his abusers' handiwork three shotgun pellets embedded beneath his skin and teeth turned permanently black from malnutrition.

The meeting was one of a man and a dog singularly suited to save each other.

As a former US Marine sergeant, Zak was one of only a few people with the mettle and physical wherewithal to get Riley out. And in rescuing him, Zak was also attempting to save himself, conquering the currents of cruelty that swelled beneath his early life and had always threatened to drown him.