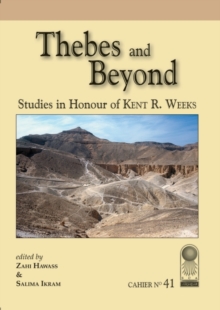 From loutish behavior in Ramesside Egypt to insularity and island identity in the desert oases, from late Predynastic offering tables to Sixth Dynasty royal women, this collection of scholarly essays explores diverse subjects brought together to celebrate the contributions to Egyptology by Dr Kent Weeks, American University in Cairo Professor Emeritus and the eminent Egyptologist whose work in the Valley of the Kings and other important sites has advanced the body of knowledge immeasurably.

Among the many original and intriguing articles are Patricia Podzorski's examination of large ceramic pedestal dishes and bowls recovered from Predynastic cemeteries reveals that they had special significance as offering tables; Salima Ikram explores the fascinating and uniquely Egyptian custom of using crocodiles as guardian talismans over doorways.

A contribution from Caroline Simpson adds a chapter to the history of the people of Qurna--the modern occupants of the Theban necropolis and their local culture.

William Peck describes a little-known pre-Napoleonic exploration to Egypt commissioned by Louis XVI, who considered making it a colony of France.

Marjorie Fisher's article on a fragment of a black granodiorite statue of the scribe Ahmose interprets the epigraphic inscription discusses the inherent enigma of the gods Amun-Re and Osiris appearing in conjunction.