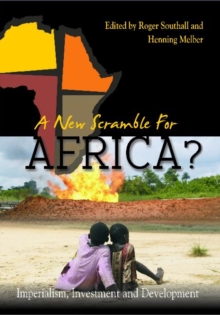 Dramatically escalating prices of raw materials, driven by rapid industrialisation in China and other countries of the global South as well as by looming world shortages, had for the few years preceding the financial meltdown and global recession of 2009 promoted a new scramble for Africa's natural resources.

It signalled a brisk turnaround in prospects for what ""The Economist"" had dubbed the 'hopeless continent' as recently as 1999.

However, while average growth rates across the continent have increased, the implications for Africa's development were and remain at best dubious.

In this important volume, the new scramble for Africa is placed in the historical context of imperialism and the contributors show important continuities with the original nineteenth-century scramble.

However, while the previous scramble was between major European powers, today the continent provides a battleground for competition between the US, the European Union, China and other emerging players such as India and South Africa.

This book raises significant general questions relating to the nature of emerging global competition between the US and China; the centrality of the struggle for oil and minerals and resulting militarisation; the international battle to capture Africa's markets; the marginalisation of African capitalism; and, the ambiguous benefits that investment and production by multinational companies bring to African communities.

Arguing that exploitation of the continent by comprador African elites remains central, the book concludes by raising important questions about the prospects for development in Africa.