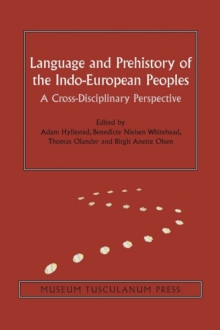 Language and Prehistory of the Indo-European Peoples : A Cross-Disciplinary Perspective Hardback

Part of the MTP - Copenhagen Studies in Indo-Europea (CHUP) series

This volume contains eighteen contributions to the increasingly detailed discussion about neolithic and bronze-age Europe.

It touches on the arrival of Uralic and Indo-European settlers, on the origins of their languages, their customs, and pantheon.

The contributors are historical linguists, archaeologists and geneticists; some interpret actual scientific findings, others go to the core of the methodology applied in the various subfields.

The interdisciplinary perspective on this epoch in European history has proven particularly fruitful ever since genetics became a reliable player in the field.

The volume contains the proceedings of the first Scandinavian conference dedicated to this approach.