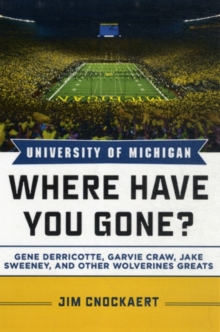 University of Michigan : Where Have You Gone? Gene Derricotte, Garvie Craw, Jake Sweeney, and Other Wolverine Greats Hardback

Part of the Where Have You Gone? series

No one player, not even someone worthy of the Heisman, is considered greater than anyone else.

With a history that starts with the likes of Tom Harmon, Desmond Howard, and Charles Woodson, it is no wonder the Wolverines are one of the most legendary forces in college football.

But what happens when the uniform comes off and the pads get put away?

Now fans of this legendary team will get the chance to catch up with the players they rooted for on the gridiron.

University of Michigan: Where Have You Gone? offers a post-college look at over forty of the players who helped build the Wolverine legacy.

Some had a singular moment that would forever define their careers.

Others played an exceptional game, in many cases against the Wolverines' biggest rivals.

Still others are remembered for a marvelous season. All of them helped Michigan become, as the words to the school's fight song suggest, "The leaders and best" and "the champions of the West."