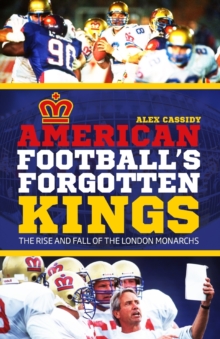 In 1991, their first year of existence, the London Monarchs won the first World Bowl title at Wembley; though just seven years later the team had folded and swiftly disappeared from the sporting public's consciousness.

American Football's Forgotten Kings recounts the true story of the only professional American football team to ever exist in England.

The book details each of the Monarchs' seasons, both statistically regarding on-field performance and culturally with the American players' stories of their experience in London.

It also delves into the history of the NFL's European experiments, the World League of American Football and NFL Europe.

Chronicling the Monarchs' surprising rise and shocking decline, Alex Cassidy has interviewed players, coaches and fans to pinpoint the successes and failures of the flagship European franchise.

Can the Monarchs experiment be used as a case study for the future of gridiron, now more popular than ever in the UK?