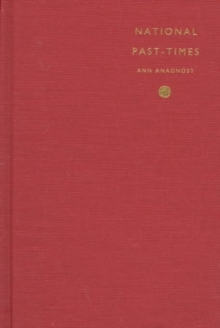 In National Past-Times, Ann Anagnost explores the fashioning and refashioning of modern Chinese subjectivity as it relates to the literal and figurative body of the nation.

In essays revealing the particular temporality of the modern Chinese nation-state, Anagnost examines the disparate eras of its recent past and its propensity for continually looking backward in order to face the future.

Using interviews and participant observation as well as close readings of official documents, propaganda materials, and popular media, Anagnost notes the discontinuities in the nation's narrative-moments where this narrative has been radically reorganized at critical junctures in China's modern history.

Covering a broad range of issues relating to representation and power-issues that have presented themselves with particular clarity in the years since the violent crackdown on the student movement of 1989-National Past-Times critiques the ambiguous possibilities produced by the market, as well as new opportunities for "unfreedom" in the discipline of labor and the commodification of women.

Anagnost begins with a retrospective reflection on the practice of "speaking bitterness" in socialist revolutionary practice.

Subsequent essays discuss the culture debates of the 1980s, the discourse of social disorder, the issue of population control, the film The Story of Qiu Ju, and anomalies at the theme park "Splendid China." 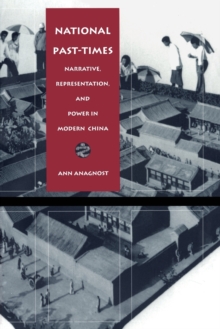