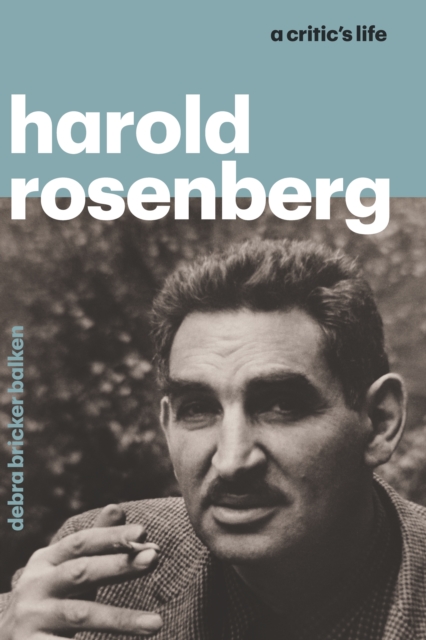 Despite being one of the foremost American intellectuals of the mid-twentieth century, Harold Rosenberg (1906-1978) was utterly incapable of fitting in-and he liked it that way. Signature cane in one hand and a cigarette in the other, he cut a distinctive figure on the New York City culture scene, with his radiant dark eyes and black bushy brows. A gangly giant at six foot four, he would tower over others as he forcefully expounded on his latest obsession in an oddly high-pitched, nasal voice. And people would listen, captivated by his ideas.

With Harold Rosenberg: A Criticâ€™s Life, Debra Bricker Balken offers the first-ever complete biography of this great and eccentric man. Although he is now known mainly for his role as an art critic at the New Yorker from 1962 to 1978, Balken weaves together a complete tapestry of Rosenbergâ€™s life and literary production, cast against the dynamic intellectual and social ferment of his time. She explores his role in some of the most contentious cultural debates of the Cold War period, including those over the commodification of art and the erosion of individuality in favor of celebrity, demonstrated in his famous essay â€œThe Herd of Independent Minds.â€ An outspoken socialist and advocate for the political agency of art, he formed deep alliances with figures such as Hannah Arendt, Saul Bellow, Paul Goodman, Mary McCarthy, Jean-Paul Sartre, Willem de Kooning, and Jackson Pollock, all of whom Balken portrays with vivid accounts from Rosenbergâ€™s life.

Thoroughly researched and captivatingly written, this book tells in full Rosenbergâ€™s brilliant, fiercely independent life and the five decades in which he played a leading role in US cultural, intellectual, and political history.