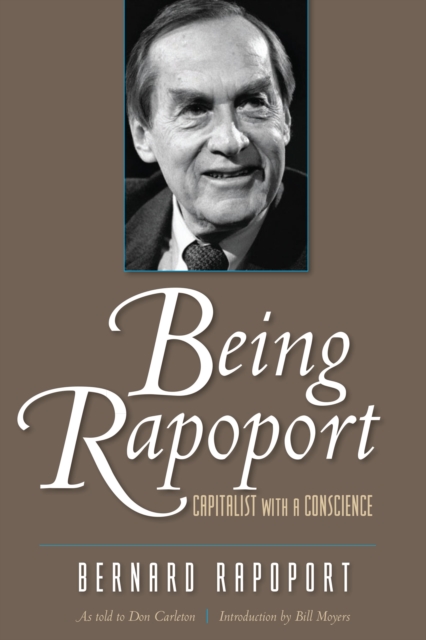 Being Rapoport : Capitalist with a Conscience Paperback / softback

Bernard Rapoport lived the American Dream. Born to Russian Jewish immigrant parents in San Antonio, Texas, in 1917, he grew up in poverty and worked his way through the University of Texas during the Great Depression.

In 1951, he founded the American Income Life Insurance Company, which he developed into a multi-million-dollar business.

Using his wealth to support a host of local, national, and international organizations, Rapoport was unstinting in his support for education, social justice, and liberal political causes. In this memoir, Rapoport explains how his early experiences of poverty and his youthful acquaintance with Marxists and New Deal economists shaped him into a capitalist with a conscience.

Rapoport goes on to describe his liberal activism as a supporter of Democrats from Ralph Yarborough to Tom Daschle to his good friends Bill and Hillary Rodham Clinton, an underwriter of the political journal The Texas Observer, a regent of the University of Texas System, a supporter of the state of Israel, and a champion of at-risk students. This updated edition includes material Rapoport and Don E.

Carleton produced between 2009 and 2011 that addresses Rapoport's views on political and economic developments since the book was originally published.