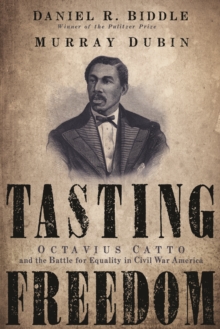 Octavius Valentine Catto was an orator who shared stages with Frederick Douglass, a second baseman on Philadelphia's best black baseball team, a teacher at the city's finest black school and an activist who fought in the state capital and on the streets for equal rights.

With his racially-charged murder, the nation lost a civil rights pioneer-one who risked his life a century before Selma and Birmingham.

In Tasting Freedom Murray Dubin and Pulitzer Prize winner Dan Biddle painstakingly chronicle the life of this charismatic black leader-a "free" black whose freedom was in name only.

Born in the American south, where slavery permeated everyday life, he moved north where he joined the fight to be truly free-free to vote, go to school, ride on streetcars, play baseball and even participate in July 4th celebrations. Catto electrified a biracial audience in 1864 when he proclaimed, "There must come a change," calling on free men and women to act and educate the newly freed slaves.

With a group of other African Americans who called themselves a "band of brothers," they challenged one injustice after another.

Tasting Freedom presents the little-known stories of Catto and the men and women who struggled to change America. 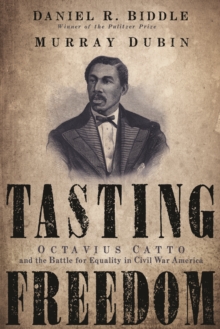