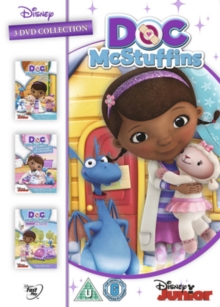 Three-volume collection of episodes from the animated children's show about the little girl who can heal damaged toys.

Six-year-old Dottie 'Doc' McStuffins (voice of Kiara Muhammad) wants to be a doctor when she grows up, following in her mother's footsteps.

She practises her skills on her toys who come to life with assistance from stuffed animals Lambie (Lara Jill Miller), Stuffy (Robbie Rist), Hallie (Loretta Devine) and Chilly (Jess Harnell).

The episodes are: 'Doc McStuffins Goes McMobile and Chip Off the Ol' Box', 'Doc to the Rescue and Don't Knock the Noggin', 'Out of the Box and Run Down Race Car', 'Rescue Ronda, Ready for Take off and All Washed Up' and 'Rest Your Rotors, Ronda! and Keep on Truckin'', 'Gulpy, Gulpy Gators! and One Note Wonder', 'Tea Party Tantrum and Blast Off!', 'Arcade Escapade and Starry, Starry Night', 'Bronto Boo-Boos and Brontosaurus Breath' and 'Doctoring the Doc and Hot Pursuit', 'Knight Time and A Bad Case of the Pricklethorns', 'Blame It On the Rain and Busted Boomer', 'The New Girl and Wrap It Up', 'Break Dancer and Bubble Monkey' and 'Un-Bur-Able and Righty-On-Lefty'.