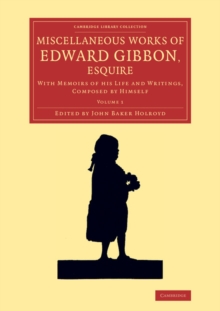 Miscellaneous Works of Edward Gibbon, Esquire : With Memoirs of his Life and Writings, Composed by Himself Paperback / softback

Gibbon had written six manuscript accounts of his own life, and, according to Sheffield, had always intended to publish his autobiography in his lifetime.

The memoir as edited by Sheffield begins with Gibbon's family history, and taking in his education, travels, and career as a historian, finishes with his anxiety over the future of Europe in 1788.

Sheffield then continues the story until Gibbon's death through his correspondence, providing a linking narrative, and this, together with 210 other letters to and from Gibbon, takes up Volume 1.

His great work, The History of the Decline and Fall of the Roman Empire, is also reissued (in the 1896-1900 edition by J.