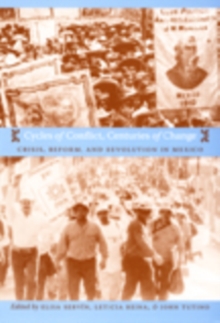 Cycles of Conflict, Centuries of Change : Crisis, Reform, and Revolution in Mexico Hardback

This important collection explores how Mexico's tumultuous past informs its uncertain present and future.

Cycles of crisis and reform, of conflict and change, have marked Mexico's modern history.

The final decades of the eighteenth, nineteenth, and twentieth centuries each brought efforts to integrate Mexico into globalizing economies, pressures on the country's diverse peoples, and attempts at reform.

The crises of the late eighteenth century and the late nineteenth led to revolutionary mobilizations and violent regime changes.

The wars for independence that began in 1810 triggered conflicts that endured for decades; the national revolution that began in 1910 shaped Mexico for most of the twentieth century.

In 2000, the PRI, which had ruled for more than seventy years, was defeated in an election some hailed as "revolution by ballot." Mexico now struggles with the legacies of a late-twentieth-century crisis defined by accelerating globalization and the breakdown of an authoritarian regime that was increasingly unresponsive to historic mandates and popular demands. Leading Mexicanists-historians and social scientists from Mexico, the United States, and Europe-examine the three fin-de-siecle eras of crisis.

They focus on the role of the country's communities in advocating change from the eighteenth century to the present.

They compare Mexico's revolutions of 1810 and 1910 and consider whether there might be a twenty-first-century recurrence or whether a globalizing, urbanizing, and democratizing world has so changed Mexico that revolution is improbable.