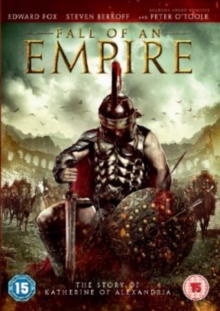 Fall of an Empire DVD

When Emperor Maxentius (Julien Vialon) sees the beautiful and talented Katherine (Zoe Michael) as a young girl, he slays her family and kidnaps her, deciding to put her knack for speaking languages to use.

Her friend Constantine (Jack Goddard), having witnessed the violent event, remains determined to find Katherine throughout his life.

Meanwhile, a grown-up Katherine (Nicole Keniheart) refuses to accept Maxentius's marriage proposal or his ruthless methods of imposing his pagan beliefs on the public.

When she debates against the religion in court she manages to convert many scholars to Christianity and, as a result, is put in prison by Maxentius.

Meanwhile, Constantine, now Emperor of the Western Roman Empire, discovers her whereabouts and, with his army in tow, attempts to rescue her.