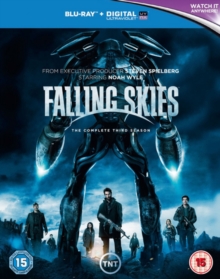 All ten episodes from the third season of the US sci-fi drama following the aftermath of an alien invasion.

In this season, military leader Tom Mason (Noah Wyle) is elected as the new American President.

Meanwhile, the group of survivors form an alliance with the Volm aliens to battle against their common enemy, the Overlords.

The episodes are: 'On Thin Ice', 'Collateral Damage', 'Badlands', 'At All Costs', 'Search and Recover', 'Be Silent and Come Out', 'The Pickett Line', 'Strange Brew', 'Journey to Xilbalba' and 'Brazil'.