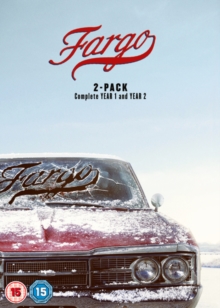 All the episodes from the first two seasons of the Golden Globe-winning anthology crime drama inspired by the 1996 film directed by the Coen brothers.

In the first series, set a number of years after the events of the film, a trail of havoc is unleashed by malevolent hitman Lorne Malvo (Billy Bob Thornton) in the small town of Bemidji, Minnesota and beyond.

During a chance meeting in a hospital waiting room, Malvo encourages down on his luck insurance salesman Lester Nygaard (Martin Freeman) to stand up against those who put him down.

This backfires spectacularly for Lester when he commits a crime loyal police deputy Molly Solverson (Allison Tolman) is determined to solve.

The episodes are: 'The Crocodile's Dilemma', 'The Rooster Prince', 'A Muddy Road', 'Eating the Blame', 'The Six Ungraspables', 'Buridan's Ass', 'Who Shaves the Barber', 'The Heap', 'A Fox, a Rabbit and a Cabbage' and 'Morton's Fork'.

The episodes are: 'Waiting for Dutch', 'Before the Law', 'The Myth of Sisyphus', 'Fear and Trembling', 'The Gift of the Magi', 'Rhinoceros', 'Did You Do This?