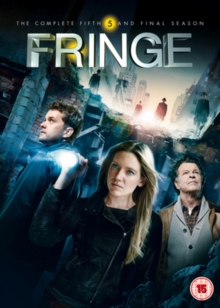 All episodes from the fifth and final season of the sci-fi television drama, co-created by J.J.

Abrams, following a team investigating cases of strange phenomena that exist on the fringes of science.

In this season, which takes place in a dystopian world in the year 2036, the Fringe team attempt to carry out a plan to defeat the Observers but sacrifices will have to be made if they are to succeed.

The episodes comprise: 'Transilience Thought Unifier Model-11', 'In Absentia', 'The Recordist', 'The Bullet That Saved the World', 'An Origin Story', 'Through the Looking Glass and What Walter Found There', 'Five-Twenty-Ten', 'The Human Kind', 'Black Blotter', 'Anomaly XB-6783746', 'The Boy Must Live', 'Liberty' and 'An Enemy Fate'.